You are here: Home1 / Blog2 / Baby Sign Language3 / How to Raise a Deafblind Child? 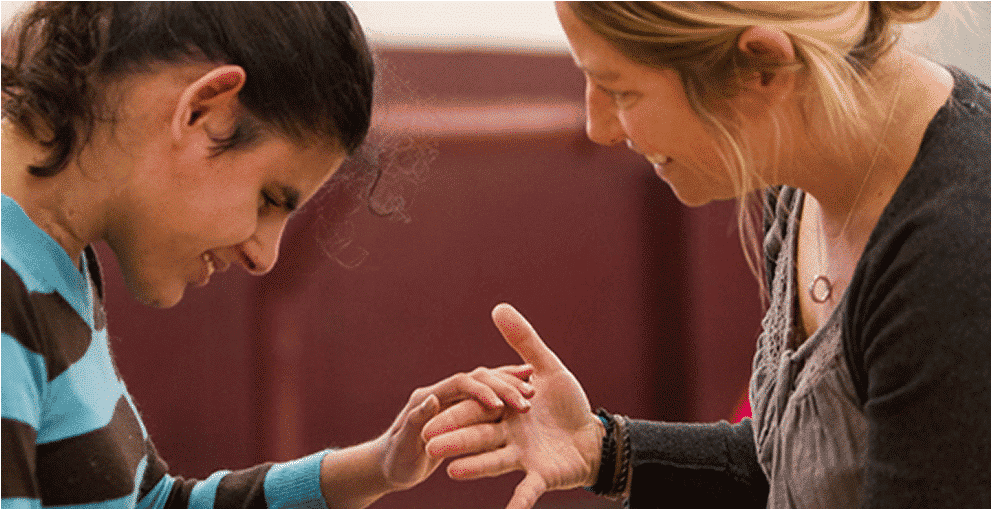 For many parents, it is hard enough to hear from the doctor’s that their child is deaf or to find out your child becomes deaf later in his or her life. Imagine if the doctor tells you the news that your child is Deafblind or your child looses his or her hearing later in life. As a parent, you start to freak out and unsure of what to do. You don’t know where to go to and how to provide the accommodations for your child so your child can be successful in life. Firstly, the earlier the Deafblindess is diagnosed the better. Secondly, there are a lot of services out there that supports the Deaf community including Deafblind. As a baby, that is when the baby’s brain is growing and developing thus is absorbing a lot of information. However, with only three of the five senses, it can be a lot more difficult for the child to develop the cognitive skills including social interactions, name and type of objects, etc. because the Deafblind child cannot see or hear also known as ‘dual sensory’ loss. Sight and hearing are the two most important senses of the five senses.

The best method for a Deafblind child to learn is through the use of tactile. For instance, if you are teaching the child about an object or toy, use your hand-under-his-hand, guide him or her to the object and put your hand on the object, letting the child follow your movement, then gently move your hand away and let the child take time to explore the object.  It takes time to get a concept across tactually.  Start of with small objects and toys then expand to larger tangible items such as table, chair, forks, etc. Allow time to explore each step and the larger concept. As for the language development, use tactile sign language. This means the Deafblind child’s hands is rested on top of your hands while signing. Start off with fingerspelling the alphabet. This makes learning objects much eaiser. Once this is accomplished then you can move onto signing the names of each objects. It will take time, so be patient when teaching. The brain will get used to understanding the finger spelled word or sign for that particular object. Be mindful that individuals who are Deafblind communicate in a variety of ways.  In general, finger spelling is not as effective as signing concepts. When the child is older and there is an ability to have a conversation. Be mindful to not rush the conversation. Even though the child signs fast, receiving information is slower. If he or she experiences any type of cognitive challenge on top of the dual sensory loss, processing time can take 4-5 times as long. This way helps build the social interactions and communication but what about reading and writing? For reading, Deafblind uses Braille to read. Similarly to what I mentioned the above, start off with the alphabet then move onto simple words and eventually to more complex words and ideas. For writing, the Deafblind person uses the braille display to type. He or she can write on a piece of paper for quick communication with other people.

How does the child become independent, in other words, know how the process is done? Follow the similar method of showing the child how it is done through touching. This will probably have to take repeated tries because the child’s learning ability is probably much slower than other abled child. Also, when explaining to your child, tell the steps in chronological order. For example, “Instead of saying, “Clean up the toys after you play.” Say, “First play. Second, clean up.” or “Play finish? Clean up.”

Beware of the “Magic Wand” when things appear and disappear from the child’s space.  Connect the dots as often as possible, from storage to use to clean up and back to storage with the child involved. Once objects are in his reach, do not remove them without the child’s knowledge.

How does the child know who his or her mom, dad, sister, brother? One way that the child will be able to recognize who he or she is interacting with is through touching the face. The hands is placed on the face and the child will use his or her hand to touch the eyes, nose, mouth, or any facial features. Through this way, the child will get familiar to what each person’s face feels like and easily recognize who is who.

When wanting to get the Deafblind child’s attention, it is important to find ways not fright your child. One way to avoid this is to tap the child on the shoulder every time you want to get his or her attention. It is important to do this consistently while the child is growing up, so he or she can used to not getting frighten and understand this means that someone is getting her or his attention.

If you need to leave for a few minutes, tell the child that you are leaving and when you will come back.  If the child does not have formal language, devise a method of communicating these concepts.  Using the ASL signs, “Hello,” “Goodbye,” and “Wait” are ways to communicate these concepts.

Read below a synopsis from Omeleto about A homeless teen meets a deaf-blind man who changes his life forever… | Feeling Through. Watch the short film here.

“Tereek — a young man trying hard not to reveal his lack of a home — is desperately looking for a bed for the night, texting friends in hopes that he can crash with them. But just when something comes through, he finds himself helping out Artie, a deaf-blind man waiting for a bus home. The encounter is anything but straightforward, not only due to their differences in abilities but also their different temperaments and ages. But as Tereek helps Artie navigate a ride home, he learns to see the world through another perspective beyond his own — and broadening his horizons in the process. Writer-director Doug Roland’s Oscar-nominated short drama — executive produced by Marlee Matlin and in partnership with Helen Keller Services — is a deceptively simple narrative that takes place over one evening between two characters. But this chance encounter — captured with visual storytelling that’s both natural, unforced and still deftly crafted — uncovers riches of empathy, along with a profound revelation about how people can offer fellowship, help and care to one another, even in the simplest of ways. With its themes of connection and empathy, the writing is economical and precise, laying down the story and character beats with pacing and care that keeps the audience interest moving forward while allowing key moments to breathe. The power of this kind of humanistic drama rests on the excellent performances that audiences can relate to, and the film succeeds admirably in this department. Robert Tarango — the first deaf-blind actor to perform in a film — plays Artie with plenty of warmth, intelligence and humor to draw in Tereek. His character is not just about the difficulty of his difference, though. His deafness and blindness enable a certain way of being in the world, one where he must trust in the world, accepts obstacles and opportunities with equanimity and enjoys the everyday pleasures and people that life gives him. Tereek in turn learns these lessons as well, as he helps Artie with the task of getting to the right bus. Tereek’s circumstances are established upfront in subtle but unmistakable ways: he has no home, and he’s trying to hide this. As a result, he’s guarded and rootless, and while he can joke around with friends, he’s not truly carefree, since he’s weighed down by anxiety about where he’s going to sleep at night. Telling details capture this inner tension: he wolfs down his food while his friends leisurely nibble at it, for example. Actor Steven Prescod’s subtle yet precise performance captures Tereek’s arc as a young man unmoored, looking out for himself because he has to. And that might cost him his humanity, especially when he snarls at a homeless man visibly less well-off than himself. But as he helps Artie move through the world, he takes on Artie’s perspective and becomes his “brother’s keeper,” opening him up in both feeling and sensibility at a juncture in life where he may close himself off permanently. Openhearted and authentic, “Feeling Through” was inspired by the director’s encounter with a deaf-blind man, which likely inspires the deep sense of tribute and affection that imbues the storytelling with its warmth and sympathy. In a world and time in history more isolated than ever, this heartfelt short has an unexpected resonance, reminding us of a simple yet profound truth that we sometimes are in danger of forgetting. We are here to help and hear one another, to feel more and see beyond ourselves. In doing so, we enlarge the scope of our lives, widen our horizons and expand our hearts.” 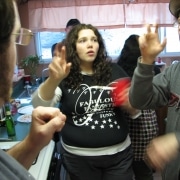 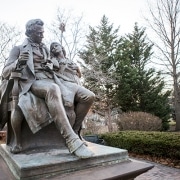 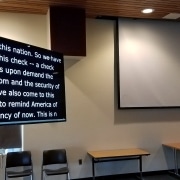