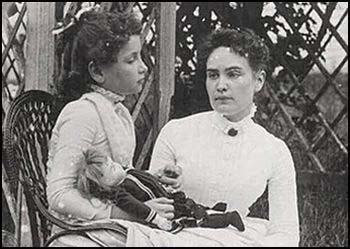 Anne Sullivan is one of the most well-known teachers in history. She is best known for being the teacher of Helen Keller and the subject of movies such as The Miracle Worker.

I believe the person I admire most in the history of the deaf would have to be a person who was not deaf at all but a person who had a tremendous impact on a persons life who was deaf and on many who are not deaf, Anne Sullivan.

From the beginning of her life, Anne had to endure numerous obstacles. Her brother was crippled from TB. She was the victim of poverty and physical abuse at the hands of her own father.

At five years old she was struck with a disease that left her blind. Two years after her affliction her mother died and her father abandoned her and her brother to an orphanage where her brother died shortly thereafter.

Even with all these trials to contend with she was able to go to school and graduate as valedictorian of her class. During this time she had numerous operations to regain her eyesight. After graduating she began her tutoring of Helen Keller.

Helen was not an easy student, being blind and deaf from nineteen months old on she was a very lost and frightened seven year old. With tremendous patience and diligence Anne was able to reach Helen and open a whole new world full of words and feelings that could have easily remained unknown to her.

With most people once a feat is accomplished it is left behind, that was not the case with Anne. See devoted her entire life to Helen, following her in school and then after when Helen would travel and give lectures.

I admire Anne Sullivan greatly for her perseverance and diligence. I truly believe she is a highly influential person in the history of the deaf.

“The Miracle Worker” has always been one of my favorite movies. Even when Melissa Gilbert did the remake of it with Patty Duke switching from Helen’s role to Anne’s role. In both movies I felt Anne’s character was the star.

She was a woman who, despite her handicap, showed a determination and strength to achieve all that she could without leaning on consideration of her partial blindness. She also believed in Helen’s ability to learn even when no one else really did. She drove Helen to learn and achieve and wouldn’t let Helen herself be her own worst enemy.

Because of her fortitude and not giving up, Helen Keller became the first deaf-blind woman to graduate from college with honors. Quite an accomplishment for one who was blind as well as deaf. One life affects another and then another touches many.

I am determined to become an advocate for the deaf community in my community in whatever way I can and am so glad for these classes provided here at no cost. Further inspiration has been given to me to move forward in this endeavor by reading the “Deaf History” that was provided here. God has lead me to this place and now I will follow Him where He leads me.