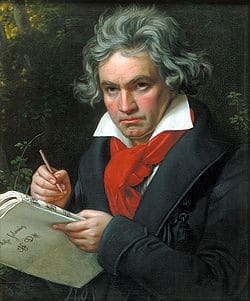 Ludwig Van Beethoven was completely deaf for the last part of his life and yet managed to produce some of the greatest music of all time.

“Oh, I love this song.” My Grandmother smiles and turns the volume on the cassette player up. Beethoven’s Ninth Symphony rolls around the room like water when it’s played aloud, every drop and rise becoming inadvertently stuck in your heart and becoming impossible to get out. It’s incredibly recognizable, and considered to be one of the composer’s greatest accomplishments. But it was also written during a period of time in Ludvig van Beethoven’s life that could be considered incredibly painful. The Ninth Symphony was first performed in 1824, and by this time, Beethoven is thought to have been almost entirely deaf.

In letters to friends, Beethoven mentioned hearing “buzzing noises” as early as 1796, and it is apparent that his hearing deteriorated swiftly. Beethoven has been diagnosed with having many different conditions affecting the delicate inner-workings of the ear since his death in 1827. But the one thing that becomes transparently clear, from the composer’s letters and statements, is that he adapted to the changing nature of his illness. He used writing as his foremost means of communication, much of which has been kept and recorded. Such records wouldn’t have been possible without this forced means of communication.

In addition to adapting his lifestyle, Beethoven continued to adapt his music in order that he could continue composing it. It’s been noted that his style of writing changed to include more notes in the lower scale, as he could no longer hear the higher notes, which made them nearly impossible for him to play correctly. Finally, in 1814, Beethoven played his last public performance. “Archduke Trio,” known formally as Beethoven’s Piano Trio in B-flat major, was to be his last public song. And despite the impact his deafness reportedly had on his playing, Beethoven went through with the performance and finished it, triumphant in spirit if not in skill.

This, the triumph of Beethoven’s spirit, is one of the reasons I loved his story so much. Even into his years of deafness, which might’ve stopped some musicians, Beethoven continued to compose music that, to this day, brings great joy to those that hear it. His refusal to surrender to defeat has had lasting ramifications. Being a Christian, I am reminded of the verse in Romans, Chapter Five, which says, “Not only that, but we also rejoice in our sufferings, because we know that suffering produces perseverance; perseverance, character; and character, hope.”

Beethoven certainly struggled in his later years, and I imagine that he found his share of despair. But when one listens to the Ninth Symphony, caught up in it’s beauty and it’s movement, one cannot help but feel a spirit of hope that lingers there. It is music. Glorious, strong music that was composed by a man who, despite great pain and trail, refused to give up on something that he clearly loved. His determination, and his endurance, are a great testimony to those who can hear, and to those who cannot. I remember this every time I hear the Ninth Symphony fill a room, and I will proceed to turn up the volume as I remember the man who created it.

I don’t feel like I know enough about Deaf History to have an actual favorite yet, but Ludwig van Beethoven has been in my thoughts a lot lately due to recently learning that he was black.

It’s amazing to me that history can be manipulated so drastically that we could have such a large misconception about a person so fundamentally important to the music world. It makes me wonder what else was erased from history, and if there were influential Deaf people that we don’t know about simply because people refused to tell their stories.

As for Beethoven himself, I really admire his dedication to his music, despite his tinnitus making it increasingly difficult for him, in addition to his chronic abdominal pain. He pushed through suicidal thoughts, and eventually started to tailor his music to what he could hear and feel, injecting the rhythm from his African heritage, creating some of the most unique music of his age because of it.

I haven’t read anything about Beethoven learning sign language, but even without it, his friends were very accommodating for him. They would write down what was happening in their conversation, and he would either respond aloud or write his response. It makes me wonder how different Beethoven’s life would have been if he had learned sign language and had a support group of other Deaf people to communicate with and normalize his condition. Would he have led a healthier life? Would he have known better ways to deal with his rapid hearing loss?

I’ve only just started to learn about Beethoven, but he really does astound me. His symphonies are beautiful, easily earning the spot in history they’ve been placed, and he was able to make these pieces despite, and most importantly, because he was deaf. He knew exactly what he was doing while probably simultaneously feeling like he had no idea what to do at all. The fact that he moved forward, despite everything pushing him back is incredibly inspiring to me. He’s a man that I’d love to learn more about, and a great way to dive into the subject of Deaf history.

There are many wonderful influential deaf people in history. My favorite would have to be Ludwig Van Beethoven. He wasn’t born deaf, but he became deaf later on in his life. We all know Beethoven as a famous musician, but not very many people associate him with the deaf community. How can someone so gifted at music be someone that couldn’t hear?

Beethoven wasn’t born deaf and he was introduced to music at a very young age. He became passionate about music and let it lead him to many great places. It was something that he poured his whole life into. Beethoven published his first music work by the age of 12! At the age of twelve, I was just learning how to talk to play “Twinkle Twinkle Little Star on the piano.

Beethoven went on to make more music. People of his time thought that it was different and out of the ordinary. When we listen to it today, we think of it being classical and of the past. When Beethoven was writing it and performing, it was the new thing. It was fresh and some people were scared off from it or the opposite, very attracted to it. This was a way that Beethoven was going beyond the musical boundaries of his time.

After finding out that he was deaf, of course Beethoven was confused. It is recorded that he wondered, “Why is it that someone with his musical ability would become without hearing, a major part of music?” I feel like if I was in his situation, I would wonder the same thing.

According to the letters that Beethoven had written, he was ashamed of being deaf at first. He was sad that he couldn’t hear his most prized possession… his musical ability. In order to communicate with others and to understand others, Beethoven would use notebooks and write down what he wanted to say or have others say to him. His complete deafness didn’t come all of a sudden, it developed over time. As he became completely deaf, he began to accept it.

Beethoven tried everything he could to try to heal what was happening with him. He went to multiple doctors and took their advice for healing. None of them worked and he continued to lose his hearing.

With the realization that this hearing loss was apart of who he was, he accepted it and continued to do what he loved. He didn’t stop making music just because he couldn’t hear it. He started to feel it. Though Beethoven’s health continued to decline, Beethoven remained faithful to his music and didn’t give it up.

I chose Beethoven as my favorite, because he didn’t let his deafness stop him from overcoming his dreams. He continued to move forward and it allowed him to stand out from the crowd. He accepted who he was and became a musical legend of all time. He is someone that we can all look up to when we’re wanting to give up on accomplishing our dreams just because we may have a “disability” or “sickness”. Anything is possible as long as we keep moving forward, despite our circumstances or “diagnosis”.

For me, it is extremely hard to decide between Ludwig Van Beethoven and Helen Keller. Honestly, my favorite historical figure is Beethoven. Beethoven is very influential and overall impressive in the things he did. Around age 41 (approximate), he was almost completely deaf. Yet, using tools such as his rod attached to the sound of the soundboard of his piano that he could bite to feel the vibrations of the sound, he continued to write beautiful music. As a musician, this is truly inspiring and impressive to me.

Now, my favorite deaf *idol* has to be Helen Keller. Even more of an idol was her instructor, Anne Sullivan, who had enough patience to deal with Helen’s overly ignorant and feisty self as a child. Yet, Helen as an adult was very strong in the community, proving that anything is possible in the education of the deaf and the blind.

If I had to choose, it would probably be Beethoven. But as I said, I have separate opinions about both, and find it difficult to choose between them.