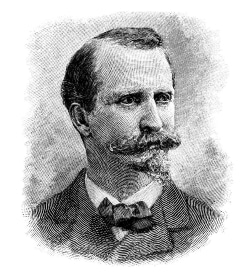 When Thomas Hopkins Gallaudet died in 1851, his youngest son Edward Miner Gallaudet continued his legacy in deaf education, played a big part in the history of American Sign Language, and founded the first college for the deaf.

In 1855, he began his career as a teacher at the American School of the Deaf, founded by his father, while pursuing a bachelor of science degree at Trinity College.  In 1857, he became the first principle of the Columbia Institution for the Deaf and the Blind in Washington, D.C.  During that time, Gallaudet desired to further recognition of the Institution by obtaining official college status, and was successful in this venture in 1864 when President Abraham Lincoln signed a bill permitting the Columbia Institution to award college degrees to its attendees.

Edward Gallaudet remained employed in several roles at the College for 53 years, advocating the use of sign language throughout his career.  He dedicated his life to advance deaf education, beginning at a very young age, and that is why I believe him to be one of the most impressive figures in deaf history.

I’ve chosen Edward Miner Gallaudet as my favorite person from Deaf History because he founded Gallaudet University. I have had the pleasure of visiting Gallaudet several times over the past few years because my daughter got her Master’s Degree in ASL interpreting there, and worked there for a year before going out on her own as an ASL interpreter.

Edward Miner Gallaudet founded a unique, wonderful place where students learn in their own language, in an environment that embraces and nurtures Deaf culture. Education is critical to the advancement of deaf people and Deaf culture, and Gallaudet University offers students unique opportunities to gain undergraduate and graduate degrees. There is no place in the world like Gallaudet. Students can get degrees in the same subjects offered at institutions for hearing students, as well in subjects like Deaf culture and education. The university has great sports teams who are fun to watch, and lots of interesting cultural offerings. The campus is green and beautiful, with both lovely old buildings and modern ones.

In addition to carrying the banner for Deaf education in the U.S., Gallaudet works to promotes education for the deaf around the world. At Gallaudet, deaf students in the US can connect with their counterparts in far away places. Deaf students from Asia, Europe, Latin America, Africa, and the Middle East attend Gallaudet, and students from the US have the chance to travel abroad themselves to meet deaf students from other countries. My daughter accompanied student groups who went to India and South Africa; these are just two of the places where Gallaudet students can travel.

Edward Miner Gallaudet’s vision created a place where deaf students could get a higher education on their own terms, without having to accommodate themselves to the hearing world. For this contribution, I’ve chosen him as my favorite person from Deaf History.

Clearly, I can’t choose a favorite, because every one of them are breath-taking! But the person I admire the most is Edward Miner Gallaudet. He continued his father’s legacy, Thomas Hopkins Gallaudet.

In 1857, Amos Kendall established a deaf and blind school. When Edward was offered an opportunity to lead the school, he gladly accepted the invitation. With that, he became the first president of the Columbia Institution for the Deaf. Because of Abraham Lincoln’s governance, the first deaf college, Gallaudet College, was founded in 1864, April 8. Soon, Edward was a fighter for the importance of sign language. Speechreading holds appreciation, but he knew speech training is not perfect for everyone. Unfortunately, his life came into an end; his body is buried in Cedar Hill Cemetery.

For my opinion, I think education is the strongest force to change something. So, when I discovered a deaf college was created, I believe that was the biggest forward step in education. No one should feel limited because their senses are not there with them.

As a violinist, I can’t imagine myself how I will play if I’m deaf! Practicing music takes immense concentration and not able to hear can be strenuous. I deeply respect deaf musicians, composers, and singers. Another favorite, Ludwig van Beethoven, he was a deaf composer. Despite his loss of hearing, Ludwig pursued on creating music and became the greatest influences today.

I’m assuming Michelle Jay is reading this, but you’re changing the world to learn how to sign! Eventually, your name will be engraved – wrote in history forever. You’re a remarkable author, writer, and teacher. (Also your whole entire team too!)

Now, I’ll leave a quote:
“Deafness, though it be total and congenital, imposes no limits on the intellectual development of its subjects, save in the single direction of the appreciation of acoustic phenomena.”—Edward Miner Gallaudet, 1869

I chose to do my paper on Edward Miner Gallaudet. The reason I chose Gallaudet was because we have the same birthday. That had me interested and finding out more about him.  He was an extraordinary man who had a dream of doing more in life. Which for some years he figured out had happened to follow in his father shoes. In 1855 he had worked at his father’s school. A few years later a man by the name of Amos Kendall asked Gallaudet to lead a school with him. Kendall had donated 2 acres of his land to form a school. The Columbia Institution of the Deaf and Dumb and the Blind. In 1864 Gallaudet had wanted the school to be an institute where they could give diplomas. Gallaudet was so passionate about it that he went to President Lincoln to have him pass a bill where they could do so. Almost 100 years later they changed the name to Gallaudet College named after Edwards’s father. Then some years later they changed the name again, it changed to the Gallaudet University. It’s amazing how these two men had come together not only to make a useful school where students could learn but to have it now be the only University in the world to be for the deaf and blind.