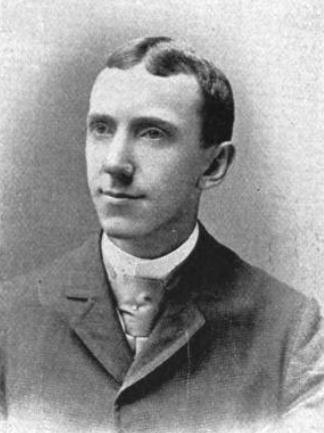 George Veditz was a former president of the National Association of the Deaf of the United States and was one of the first to film American Sign Language.

“ASL is not just a different language, it is a different medium for talking, and this fact may make you hesitant, and perhaps even suspicious about what you can and cannot say in ASL.  You are in good company because Deaf people wonder how it is possible to talk in speech about such things as the destructive force of twisters and the tender moments of a child playing alone.  To Deaf people the picture of communication painted by vowels and consonants, pitch and loudness pales in comparison to the vibrant images that jump off the fingers and hands, face, and body of a person signing.”  This quote, from Barron’s “American Sign Language: The Easy Way”, really jumped out at me as describing as much as you can in words the beauty and uniqueness of ASL.  This is what drew me to the language and to its study, and it is what makes George Veditz my favorite person in deaf history that I’ve learned about thus far.

George Veditz lived from 1861-1937, and was a great defender of the rights of the Deaf and was instrumental in the preservation of American Sign Language during a time when its legitimacy was not only questioned, but was almost destroyed by the oralist movement.  Many times he fought alone against the popular opinion of his day, but his efforts are now highly regarded in the Deaf community and cherished by those who practice the language.

George Veditz was one of the first to film sign language, and his pioneering 1913 film “The Preservation of Sign Language” was included in the National Film Registry in 2011, and included such famous signers as Edward Gallaudet and Robert McGregor.  In it, he signed, “As long as we have deaf people on earth, we will have signs.  And as long as we have our films, we can preserve signs in their old purity.  It is my hope that we will all love and guard our beautiful sign language as the noblest gift God has given to deaf people.”

Veditz was not born deaf, but became deaf at the age of 8 due to a bout of scarlet fever.  He was already fluent in English and German, and became fluent in many others, including French and ASL.  Veditz had a varied background in education, and created strong ties at the different schools he attended.  He graduated as valedictorian from Gallaudet College in 1884 with a degree in education.  He taught at his alma mater, the Maryland School for the Deaf, and at the Colorado School for the Deaf.  He fought for deaf rights in employment, all the way to the white house.  He was able to band the Deaf community together to fight for their rights and preserve their culture and language.  Children today can learn under bilingual programs, using oral (English) and gestural (ASL) techniques, thanks, in part, to the work of George Veditz.  The Deaf culture and heritage has greatly benefited from his fight and refusal to give in to the status quo when it came to his people – who are “first, last, and all the time the people of the eye” in the words of Veditz himself.

Was a former president of National Association of the Deaf of the United States and was one of the first to film American Sign Language.

Following his graduation from Gallaudet (Columbia) in 1884, he began to work as teacher at the Maryland School for the Deaf. He also continued to study at Gallaudet (Columbia) and obtained a master of arts degree in 1887. The next year, in 1888, he accepted a new position at the Colorado School for the Deaf, where he worked as a teacher for another seventeen years. Before the move to Colorado, he founded the Association of Deaf people of Maryland.

In 1907 he was elected president of the National Association of the Deaf of the United States (NAD). Its greatest then preoccupation was the preservation of sign language, that he saw as being threatened by the advance of the oralist proposals in the schools. In that time the cinema began to become popular, and Veditz dedicated the NAD to gather money to finance recordings of speeches in sign language.

The project, that began in 1910, aimed to film to masterful uses of sign language. One of the people recorded was the then director of Gallaudet, Edward Miner Gallaudet. The shootings of the NAD are the first registry done of sign languages in the world, and are considered a valuable document of Deaf history. In its shooting, Veditz does an enthusiastic defense of the right of the Deaf people to use sign language, talks of its beauty, as well as its value to humanity. The Library of Congress announced on December 28, 2011 that it had named the landmark 1913 film, The Preservation of the Sign Language, for inclusion in the National Film Registry.

“As long as we have deaf people on earth, we will have signs. And as long as we have our films, we can preserve signs in their old purity. It is my hope that we will all love and guard our beautiful sign language as the noblest gift God has given to deaf people.”–George Veditz, 1913.