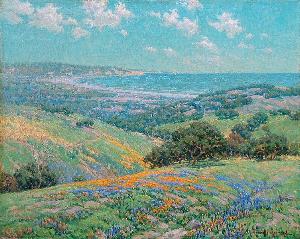 My favorite deaf historical figure is Granville Redmond. His struggle to be accepted by the common man is fairly touching, and his paintings are simply out of this world!

Throughout his life, he accomplished much more than most do. Aside from creating a wealth of inspiring, beautiful artwork, he also worked with historical legends like Charlie Chaplin! Apparently, Charlie Chaplin liked Redmond’s art so much that he gave him a private studio on a film lot, and helped him to gain publicity for many years.

Redmond specialized in landscape paintings, and breathtaking ones at that! His artistic commitment really inspires me, especially since I’m also heavily involved in the arts. The way that he was able to capture light was completely impeccable, and I really do draw a lot of influence from him. I can only dream of ever painting with the skill and expertise of Granville Redmond, and I hope that in the future his work will become even more widely recognized!

I find it especially interesting that Redmond was not born deaf, but instead became deaf after falling ill with scarlet fever whilst an infant. Redmond really should serve as a point of inspiration to everyone–deaf or not. I encourage everyone to research him. His story really is inspiring!