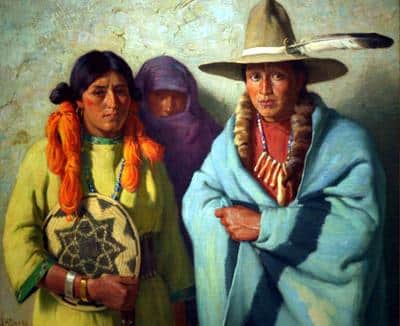 Joseph Henry Sharp was one of the founding members of the Taos Society of Artists, a group that produced some of the most significant artwork in American history. Born in 1859, he became Deaf after an incident where he almost drowned in a river at the age of 12. By age 14 his hearing had completely deteriorated and he left school to work and pursue his true passions of drawing and painting. He studied in Cincinnati and eventually also in Europe for many years and in 1883, at age 24, he traveled West to see first-hand the Native American cultures that had fascinated him throughout his life. He traveled through New Mexico and up the West Coast into what was then Washington Territory, sketching portraits of the tribe members he met. But it wasn’t until 1893 when Sharp first visited Taos, New Mexico on a commissioned job that he truly fell in love with the yet unspoiled quality of the area and its people. 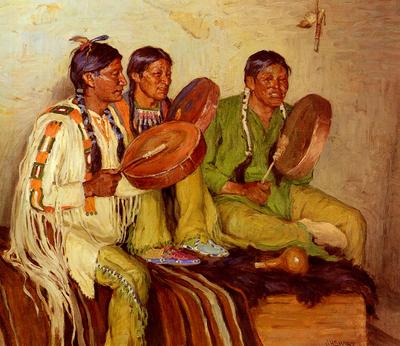 Sharp returned to Paris to further his art studies and there he met the other artists that would one day join him to establish the society in Taos. When he returned to the U.S. he moved to Montana, camping on the battlefield of Little Big Horn, to paint portraits of the local Plains Indians. His notable work from that time garnered national attention and in 1900 the Smithsonian Institution purchased 11 of his portraits. President Roosevelt took interest and had a cabin built for him through the Indian Commission to aid his historically relevant undertaking. Finally, in 1912, Sharp became financially independent from the sales of his successful and prolific body of work and he moved to Taos permanently. That year the Taos Society of Artists was established and Sharp worked alongside Burt Phillips, Ernest Blumenschein, and others who would help shape the history of American art forever.