There are many different American Sign Language symbols and letters that are used in a variety of ways.

There are symbols used for writing ASL signs, glossing ASL sentences, and fingerspelling in ASL.

American Sign Language symbols were developed in order to write how ASL signs are signed. This is called SignWriting. It was developed by Valerie Sutton in 1974.

Notice how the sign language symbols are able to indicate all four of the main sign parameters:

In the image for DEAF, the sign parameters are shown this way:

In the image for WORLD, the sign parameters are shown this way:

The official website (and the best resource) for these types of sign language symbols is Sutton’s SignWriting Site.

Because ASL is an unwritten language, glossing is a technique used to create a written version of ASL.

There are certain rules and symbols that are used when glossing a sentence in ASL. Here are some examples:

Signs that are translated into more than one English word are shown with dashes. The lower case words are implied, so they are not signed separately.

Fingerspelling is shown with dashes between the capital letters or with “fs-“.

Gestures, or words that aren’t necessarily signs, are shown with quotation marks. An example of using gestures would be glossing a name sign.

Signs that are repeated are shown with plus symbols (“+”). The number of symbols indicates the number of times the sign is repeated.

he-GIVE-her BOOK
“He gave her the book.”

Non-Manual markers and facial expressions are shown on a line above the gloss when learning sign language. Here is how they’re shown: 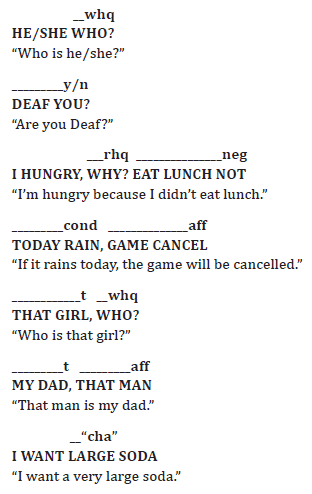 Examples of Non-Manual Markers in Glossing

The ASL alphabet can also be considered sign language symbols. These visual symbols are used for fingerspelling in ASL. 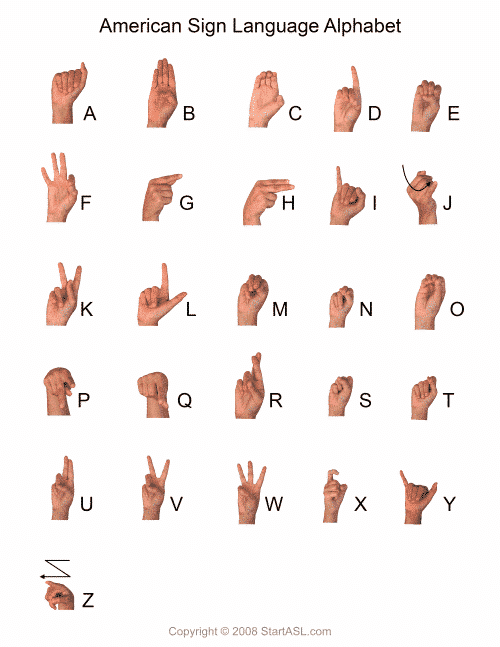