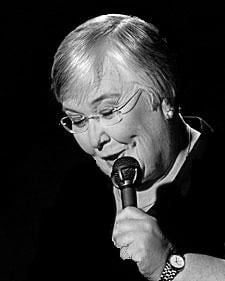 Sue Thomas was a deaf undercover specialist for the FBI. She was the inspiration for the TV series Sue Thomas: FBEye, an international speaker, author, and founder of Kennels of Levi: EPEC Service Dogs for people who are physically challenged. She was also the founder of WaterBrooks – a Christian spiritual renewal center – and the founder of Sue Thomas Ministries homeless outreach.

Born in 1950, Miss Thomas had a sudden and total loss of hearing at the age of 18 months. Her parents were told she would never amount to anything and that she should be institutionalized.

Her parents devoted themselves to helping their precious daughter prepare for a productive life. With little support from professionals and no knowledge of deaf culture, Sue was placed in the public school and tutored by experts in developing her voice and lip-reading skills.

At the age of 7 she became the youngest Ohio State free-style skating champion in skating history.

She graduated from Springfield College in Massachusetts with a degree in Political Science and International Affairs.

Her expert ability to read lips eventually led to her being hired by the F.B.I. working with an elite undercover surveillance team.

Miss Thomas is also the founder of “The Levi Foundation” (in memory of her first service dog). This program trains dogs to service people with multiple disabilities. A need Miss Thomas discovered when she was diagnosed with Multiple Sclerosis in 2001.

What an amazing person. It said in this article that her parents were told she should be institutionalized, as she would amount to nothing. If this (her deafness) had been found 24 month before, her parents would have been told that they should abort her. However, her parents were determined that she would live a normal life, and so they loved her, cared for her, and went the extra mile many times. Her life is a testimony to the sanctity of human life.

May 24th, 1950 in a small Ohio town, a happy healthy baby girl was born to a loving devoted family. Sue lost her hearing at 18 months of age. Like all deaf persons, she was facing a long hard road. Not only with herself and learning how to communicate; but also with people who didn’t understand what it meant to be deaf. Her parents were strongly encouraged to put her away in an institution. Instead, they worked. Hard. Sue and her parents did everything they could to give sue the ability to talk.

Throughout her early childhood, she worked with speech therapists, spent hours in front of the mirror -trying to make her mouth form the same shapes her mother’s mouth was- trying to learn to speak.

When Sue reached school age, she was determined to attend public school like every other child. She did not want to be any more different than she already was. She knee being the first deaf person in the history of her public schools entire district, was going to be more than difficult (but she made it this far, right?)! Her teachers and peers did not know what to do. Their solution? Put her in the “dummy” classroom and forget about her. Now she thought, “There’s nothing I can do about this but I can make the most out of what I got.” Sue was not going to let anybody decide her fats. Everyday she sat in the front of the class and watched the teacher’s lips. This didn’t do much at first. She said “I always got the questions but hardly ever got the answers.”.

After years, of struggles, heartache, torment and tears… she had taught herself (with the help of her very supportive and dedicated parents and speech therapists) how to read lips and learned how to speak.

Not only did she compete grade school, she also graduated from Springfield College in Massachusetts with degrees in International Affairs and Political Science. THEN she went for postgraduate studies at Case Western Reserve University!

Now, she thought she would try putting that education to good use and set out on her job hunt. After months of searching and she heard the F.B.I. is looking for deaf persons. She was initially hired for fingerprint analysis, but soon she used her lip reading skills to understand conversations recorded on videotape without sound. This skill promoted her from an assistant to an agent. Eventually, she retired due to health problems and she continued her education.

Thomas’ story was so unique they even made a TV show about her and her hearing companion; known as F.B.Eye. During an interview Sue said she only had two requests “The dog be called Levi. Levi was my first hearing dog and I wanted to honor him. Second, to play me; I want a nice, tall, thin blond (to make me look good).” She was granted both requests and the show was a success aired 54 episodes.

Today, when Sue Thomas isn’t traveling the world giving her famous motivational speeches, she is at her home in Vermont with her dog Katie. Her next big adventure? She hopes to open a dog training center called “The Levi Foundation.”