Photo courtesy of
the American School for the Deaf

When you are 9 years old, you don’t think about making history. Alice Cogswell made history at the age of 9 by sparking the beginning of the creation of American Sign Language and American deaf education.

Alice is known as the young deaf girl who inspired Thomas Hopkins Gallaudet–the man who began the education of the deaf in America.

Alice Cogswell was born in 1805. When she was just 2 years old, she came down with “spotted fever,” a type of meningitis. She lost her hearing, and later, her speech.

Her father, Mason Fitch Cogswell, was neighbors with Thomas Hopkins Gallaudet. When she was 9 years old, Alice met Gallaudet.

Realizing that Alice was very smart despite her hearing loss and inability to speak, Gallaudet wanted to teach her how to communicate.

Alice was having some success learning how to spell and read from Gallaudet. However, Gallaudet didn’t know the most effective way of educating a deaf child. He and Alice’s father knew a formal school would be the best option for her, but a school for the deaf did not exist in the United States.

Gallaudet then traveled to Europe to learn the most successful methods used to teach deaf children. He brought back with him Laurent Clerc, a deaf educator who taught using French Sign Language. Together, they established the American Asylum for Deaf-Mutes in 1817, which is now known as the American School for the Deaf. 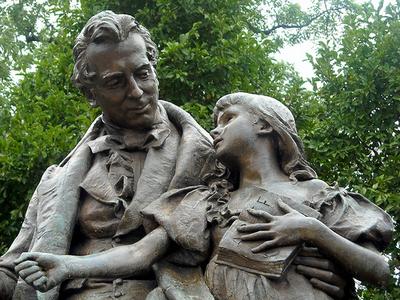 Alice was the first to enroll in this history-making school.

Alice died in 1830 at the age of twenty-five, just thirteen days after her father died.

Today, a gorgeous statue of Gallaudet and Alice stands at both the American School for the Deaf and Gallaudet University.

Isn’t it truly amazing how much a little 9 year old girl can do? She changed the lives of many deaf children in America by sparking the beginning of American deaf education!

Despite a short life, Alice Cogswell led a life well-lived. I admire her greatly because she did not allow society to tell her that being deaf in the 1820’s somehow made you less than human.

Alice was born in 1805, and contracted “spotted fever” (most likely measles or meningitis) at 2 years of age. It removed her ability to speak and hear. Alice’s hearing impairment alienated her from other children.

When she was 9, Thomas Hopkins Gallaudet did not see her inability to hear, but her ability to see and learn. He engaged with young Alice by drawing pictures. Through this, he recognized she was not stupid, but merely ignorant and more than capable of learning. Alice was the spark of inspiration that brought education to the deaf. She valued learning, and even attended a hearing school to learn to read and write.

What amazes me is that there must not have been such a thing as interpreters at the time. Learning was so difficult, but Alice worked so hard to become literate. This fierce determination for the deaf to be taught caused Gallaudet to travel to Europe. He brought back a better knowledge of deaf education.

Alice was the first student enrolled in Gallaudet’s “American School for the Deaf” proving to the world that she was an intelligent young woman, not something less than human. Her death came at the age of 20, 6 years after graduating Gallaudet’s school. Alice is amazing simply because she chose to be herself, and challenge society’s beliefs about deaf capabilities.