You are here: Home1 / Blog2 / Deaf Culture3 / Children of a Lesser God 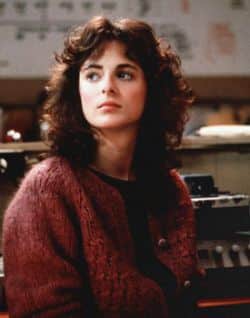 Children of a Lesser God is a 1986 film that, we believe, brought Deaf Culture and the values of deaf people into the public spotlight. If you have never seen it, you will be blown away.

The movie stars William Hurt, Marlee Matlin, Piper Laurie, and Philip Bosco. The film was directed by Randa Haines, and was adapted by Mark Medoff, Hesper Anderson, and James Carrington from Medoff’s award-winning play that has the same name as this film. This play ran on Broadway from 1980-1982.

Marlee Matlin won the Academy Award for Best Actress from her debut role as Sarah Norman in this movie. She was only twenty-one years old–the youngest actress to receive this honor.

This film was also nominated for an Academy Award for Best Actor for William Hurt, Best Supporting Actress for Piper Laurie, Best Writing for an Adapted Screenplay, and Best Picture.

Children of a Lesser God tells the both tragic and beautiful story of Sarah Norman, played by Marlee Matlin, who works at a speech school for the deaf. She is a troubled and frustrated young woman. James Leeds, a new teacher at the school, played by William Hurt, encourages her to learn how to speak. Sarah already uses sign language as her primary language, and resists James’s attempts. She doesn’t think she needs to learn how to speak.

They begin having feelings for each other, and end up living together. Their differences and stubbornness strains their relationship. James still tries to get Sarah to talk, and she simply does not want to. Sarah then leaves and returns to the home of her mother, whom she is trying to reconcile with. Of course, Sarah and James realize they need each other, and Sarah returns to him.

This movie is a great representation of the world of Deaf Culture and how it interacts with hearing culture. The hearing culture constantly wants deaf people to speak and become more like hearing people, while the deaf want to remain as they are.

If you have not seen this movie, you definitely need to if you want to be a part of the Deaf Community. You will gain so much more understanding just by watching it.

A Place Where We Can Meet

I just watched a really good movie called “Children of a Lesser God”.

It’s a love story between a hearing man and a deaf woman.

Their conflict personifies the conflict played out in real life between the hearing world and the deaf world.

The hearing and the deaf don’t often understand each other. We don’t always get along with each other.

William Hurt’s character is a hearing teacher. He teaches at a deaf school and wants to “help” deaf students by teaching them to speak. He knows the world is largely a hearing world and he believes it’s best for deaf people to learn to manage in the world by being able to use their voice, not just their hands, to communicate.

Marlee Matlin’s character is a deaf cleaning lady at the deaf school. She was a former student at the school but has stayed there to work. She has no interest in using her voice. She’s been deeply hurt by the hearing world and what it wants. She wants to be accepted as a deaf person. She wants hearing people to make an effort to learn about her and her language. She’s offended that hearing people want her to use her voice but they never make an effort to learn sign language.

As they get closer to each other the tension increases. William Hurt not only wants to help Marlee Matlin, he also wants to truly get to know her. Marlee Matlin seriously doubts this is possible and leaves the deaf school to get space between herself and William Hurt. She feels she’s becoming too much what William Hurt (hearing people) wants and not truly who she is as a deaf person.

They love each other but can they live with each other? It’s not a problem that can be solved.

But maybe it’s a tension that can be managed? Near the end of the movie, as Matlin comes back to Hurt to try and make the relationship work again, Hurt asks a poignant question,

“Do you think there’s a place where we can meet? Not in silence?

With that they embrace and kiss and the movie ends.

I believe the answer is, “Yes”. There’s a place where hearing and deaf people can meet. It doesn’t have to be only in silence or only in sound. It will require both sides to move toward each other, learn the language of the other, and make an effort.

A genuine relationship and connection is possible between the Hearing and the Deaf through mutual respect, love, and understanding… and effort.

Certainly many deaf students at the university saw the movie in 1986. They had to feel proud that Marlee Matlin, a Deaf actress, played a defiant deaf character. She showed the world that a deaf person has great intelligence, beauty and dignity and is worthy of being known as she is.

For me, I identified more with William Hurt’s character. As a hearing person he’s trying to be helpful. He’s well intentioned but he doesn’t always understand what’s really needed. That’s been true in my relationship with my Hard of Hearing son. I want to help him and yet I don’t always know what he really needs. I can lack understanding of what it’s like for him to be nearly deaf. I need to respect him and make an effort to move toward him, asking more questions and making fewer assumptions.

There’s a place where I can meet my son and others like him. That probably had the biggest impact on me.