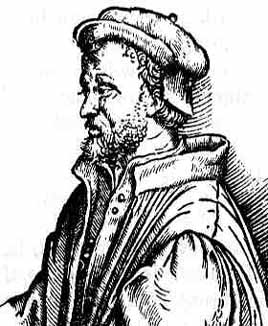 Geronimo Cardano played a significant role in the history of sign language–particularly in the history of deaf education. Cardano was an Italian mathematician and physician. He discovered in the 1500s that the deaf were able to be educated by using written words. Before his theory, people believed that it was impossible for people to learn without hearing and speaking. Cardano was the first to argue that deaf people could, in fact, learn how to read and write without first learning how to speak. He then used the method of writing to teach his deaf son and proved his argument right. This was a huge step in the right direction for American Sign Language.

I picked Geronimo Cardano because without him it would not even be possible for anyone else to improve on or even establish ASL. He was the one who decided that it wasn’t necessary for you to be able to hear in order to learn. Just because you have a “disability” does not mean you should not be given the opportunity to educate yourself and expand your mind.

Deaf people could not even own houses! Where were they supposed to live? It’s not like they couldn’t comprehend what was going on around them; they just did not hear the world’s sounds like most did, just as the blind do not see the world as we see it.

It actually shows the ignorance of the world and how “important” society figures can manipulate what is “right/wrong”. It makes no sense how one thinks they have the power to determine who can and cannot educate themselves. Just because it takes time to learn and may be more difficult for you to communicate with them does not mean that you should just cease all efforts.

I am proud to see that someone went against the grain; he took charge and questioned what had never been questioned! Usually people decide that because so-and-so said for thousands of years “this is the way it is” they just accept it. He rebelled and because of HIS efforts we now have learned and accepted the deaf and I think that is a phenomenal thing.

Geronimo Cardano was my fave because he was the first to realize that deaf people are just as smart as hearing they just cant hear. I think he should have gotten more credit because he worked with his son and made the discovery. I also just thought it was cool that his son could figure it out with out him talking to him explaining how writing worked.

As a parent of two hearing children, I am amazed at what I learn from them. I chose Geronimo Cardano as my favorite. As a busy physician having seen and heard all that children who are deaf can not learn, he chose to ignore it. He must have spent much time with his son in order to realize that he could learn, or at least listened to his wife when she told him the boy could do things that weren’t supposed to be possible.

As a person with a degree in secondary education I have found that anyone can learn something if you find the right way to teach them. Too often the problem is not the student but the rigidity in which they are taught does not make sense to them.

So kudos to Mr. Cardano for caring about his son enough to teach him and prove the rest of the world wrong.

Geronimo Cardano is my favorite person in this article, because although he did not think of using sign, he still believed that deaf people could learn, and that there were methods of learning without being able to hear. I think he was the first step in recognizing that being deaf was not necessarily a disability, and it’s sweet how he taught his son and didn’t give up on him. I always thought being deaf was a disability until I started watching Switched At Birth and my friend and I decided to take this course. Lots of people copied Geronimo’s methods and that probably helped a lot of deaf people back then who didn’t have sign or any ways of communication. It makes me wonder what life would be like for deaf people nowadays if society had stuck to his methods instead of creating sign. It would probably be very hard for many people and without sign, a language of their own, Deaf people would not have their own culture, and would still be thought of as having a disability. But when people copied his methods, they changed them slowly to what we now call sign language, from Juan Pablo de Bonet’s signed alphabet, to organized education for deaf people. He may not have invented sign, but he was the root of the idea that deaf people were people, that they were smart, and could learn. That is why Geronimo Cardano is my favorite person in this article.

I have to say that Geronimo Cardano is my favorite person from Deaf History at this point. The reason I chose him is because from Aristotle, one of the greats, all the way to his time, no one had taken a stand to step outside the “box”.

To me that makes him so admirable. Going against everything around him and finding that knowledge inside that led him to understand beyond the “norm”, how amazing! Then to take it to the next level and show the world by teaching his own son. Apparently his son had been blessed with deafness in order for him to end up on that journey. Not to mention the innovation it must have taken to figure out how to go about something that no one else had even considered up until that point. I can only imagine the trials and errors, the adjusting and readjusting of methods, not to mention the time it must have taken.

As a homeschool mom of a special needs child, I also know how frustrating it can be teaching your own child at times. I imagine Geronimo probably had very little support in that teaching process, as the popular belief was the Deaf could not learn or be taught. What a ridiculous notion. This guy is really a good example of how we can all learn that, no matter what society says can and cannot be done that it is up to us as parents to take it into our own hands and do what is best for our own children and not allow society to dictate our children’s realities and capabilities.

Geronimo Cardano is my favorite, Aristotle is a jerk

My favorite person from deaf history would probably be Geronimo Cardano because he was the first person to recognize that just because a person was deaf didn’t mean that they were also incapable of learning. Before this discovery, deaf people were written off as stupid and (this breaks my heart) “non-persons” because no one had given them a chance to learn. Of course a person who can’t hear isn’t going to learn a spoken language. Duh! Geronimo Cardano had an open enough mind to give deaf people a chance. In a way, he was the catalyst for the progression of deaf people into society.

Another thing I like about Geronimo Cardano is that he was working with his child, and helping his son defy the expectations that society set up around him. One thing I believe that adults too often forget is that children are the future. There was a quote I read once that said something like “the world is not a gift from our parents; rather it is borrowed from our children” (sorry if I got the wording wrong, but I believe that it is some sort of Native American proverb). He was being, simply put, a good parent. He was helping his child reach his full potential. By helping his child reach his potential, he was also setting the world up to be a better place, and to have a better future.

It really makes me sad, the irresponsibility that adults, the people that children are supposed to look up to, treat our world with. They create messes that we have to clean up. Aren’t parents supposed to want the best for their children? It’s not just the environment, but also the education system too. Americans are known for being proud, and being able to back up that pride. So then why am I sitting in a classroom with 34 other kids, listening to the same lecture that my teacher has given for the last twenty years? And really, can you blame that teacher, who holds the future of the 150 students that she teaches in her hands, for not caring about the children that she teaches? Would you care about your job when it pays well below what it should? Can you blame that teacher for not caring because there is NO incentive to do well? That teacher can’t make ends meet with her wage, and can barely feed her two children. A tree is only as strong as its roots. Teachers are our roots, and are therefore the roots of our future. So why not have the best teachers teaching? Why not pay well enough to afford the best teachers? The future is too important to lose because children weren’t given the proper stepping stones to create a better future. The price of a lost future is too high to pay, no matter how much money you have.

Back to the article. For being such a great thinker and philosopher, Aristotle was incredibly close-minded about his views of deaf people. When the pioneer thinker of the times is not willing to open up his mind to the idea that deaf people can learn, even if it’s not by the usual standards, is very disappointing, and had some very negative ramifications. Deaf people were then labeled as “non-persons”. Think about how humiliating and demoralizing that must have been for these otherwise normal human beings. Just because a person is different does not mean that they aren’t equal. In his defense, it seems that Aristotle was simply succumbing to the human condition. All through the ages, people who are considered “different” have been victims to inequality, whether it was deaf people, African-Americans, women, etc. Even though people are supposedly getting smarter, things still are unequal, hence my calling it the “human condition”.

Okay, so right now I am positive that I rambled, and I am sure that most stopped reading after half way, but if you read the whole way through, thank you for listening to my two cents.