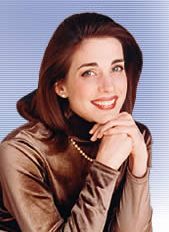 Heather is both beautiful and intelligent, and it’s nice to see that the panelists didn’t discriminate against her because she’s deaf.

Heather was born in Alabama on February 24, 1973. When she was eighteen months old, she came down with influenza and became deaf.

Her doctor told her mother, Ms. Gray, that Heather would not make it past the third grade. Her mother then was determined for her daughter to learn how to speak. She enrolled Heather in dance classes, hoping that learning rhythm would help her learn speech.

Because of this emphasis on speech, Heather did not learn American Sign Language until her senior year in high school.

Despite the challenges she faced because of her hearing loss, Heather kept a positive and optimistic attitude throughout her childhood and into her adulthood.

In the 1995 Miss America pageant, Heather was Miss Alabama, and was crowned Miss America.

During her one-year reign as Miss America, Heather devoted her time to working with deaf children. She also focused on getting the word out to all children (both deaf and hearing) that positive thinking is very powerful and helps lead to success.

Heather also showed much dedication to the Deaf Community. Serving on the executive board for the President’s Committee on Employment of People with Disabilities, she helped establish a multimedia public service campaign to help identify early hearing loss. She was also a spokesperson for the Helen Keller Eye Research Foundation and the Starkey Hearing Aid Foundation.

After her reign as Miss America, she married John McCallum, a hearing man, and became Heather Whitestone McCallum. Together, they operate Heather Whitestone, Inc. She has written three books, Listening With My Heart (which tells how she overcame challenges through self-reliance, hard work, and faith), Believing The Promise, and Let God Surprise You (which encourages people to let God surprise them, even with what may seem impossible).

Heather is truly an inspiration, and definitely proves that anything is possible with God’s help.

A lost part of my culture

Growing up I was a victim of oralism or audism. The doctors and specialists told my mother not to put me in deaf school or for ASL to be taught, rather I was to learn how to speak correctly and read lips.

I was mainstreamed in public school and it was expected of me to be the one to know what was going on without help. It was very lonely and hard. I remember wondering where the other deaf children were!

I was teased by my hearing classmates by the way I talked and the fact that I couldn’t understand them. We learned of Helen Keller briefly in public school and I remember wishing that we had spent more time on her history!

My favorite deaf person that I can relate to is Heather Whitestone! I remember watching that Miss America Pageant and was so inspired by what she accomplished and how she didn’t lay down and let hearing people tell her what she couldn’t do!

More recently I am a fan of Deanne Bray and her husband Troy Kotsur. They are wonderful examples of successful people that have gone far beyond what hearing culture has told them they can do.

I feel like because of oralism I lost a big part of a culture and a community of people where I would have been embraced and encouraged that being deaf was an asset rather than a disability!

Heather Whitestone McCallum is my favorite person from Deaf History because she used her fame and popularity to bring the Deaf Community into the spotlight with her. Just because she won Miss America that didn’t change the fact that she still wanted to be able to help other Deaf people. She stayed humble and made sure she was helping the community. She showed that Deaf people are not any different because they cannot hear.

Because of Heather being in the limelight she helped bring out the positive sides of the Deaf Community. She has showed that you can function in society even if you cannot hear. She put herself out into the world not knowing what was going to happen. Because of her doing that now there are more Deaf people that are functioning in society without issues.

You could also look at how she changed women empowerment. Now when people see that she can win Miss America without being to hear other woman might follow in her footsteps. She shows that even if you aren’t a “perfect” person you can still achieve your dreams.

She created the S.T.A.R.S program to help give empowerment to people. Heather says that the biggest handicap is not a physical ailment but actually negative thinking. She believes that everyone has their own talents and that they should reach for their own stars.

Giving God the Credit He is Due

Unfortunately, I feel almost materialistic for deciding that Heather Whitestone is my favorite person mentioned on this page. Although, my choice was not made simply because she was beautiful and successful. No, my choice was made because of her attitude and humility.

Heather not only did the impossible by facing her disability and overcoming it, but she did it with hope, endurance, and placed the credit where it belongs, in God’s hands. We are commending many of the people on this page because of their great works in Deaf History, but really, as amazing as what they did was, they should not be receiving the credit.

Heather was not afraid to credit God for her success no matter what others may have thought of her. I’m sure that is one reason God blessed her so much. When people are not afraid to give God the glory it warms my heart. This is why Heather Whitestone is my favorite person from Deaf History (For now, at least).

by Janeel Hew: Thank you for sharing. I really enjoyed your comments. All glory and honor to our Father, who surrounds us with the blessings of love and guidance as we try to not only accept His Will; but to fulfill His Will, and give Him the Glory. May we never forget the beautiful Blessings of His Love.
God Bless, and may He continue to guide you heart.

Not only was Heather Whitestone the first (and only to this date) deaf Miss America, but she was the first Miss America that was crowned despite having a disability. While competing in the Miss America competition, she gained respect from people both inside and outside of the hearing community. Whitestone was not deaf from birth but was deafened at 18 months of age due to a form of influenza. Despite her loss of hearing, she attended public school and learned to speak and read lips without an interpreter. Eventually, her parents enrolled her into Central Institute for the Deaf in St. Louis, Missouri. This was done when she was twelve. When she was at the Miss America pageant, on the outside she appeared to be just like the rest of the girls. She had perfect hair, a beautiful smile, and she looked good in a bathing suit. Although she had the outward appearance down, her STARS (Success Through Action and Realization of your dreamS) platform was what ultimately won the judges over. After her win, she finished her college education with the scholarship money that she received. She is now married with kids and has written several books. Her name, smile, and ambition will permanently reside in the hearts of the American people both inside and out of the deaf community.

As a hearing person just discovering the wonder and beauty of ASL and the incredible community of people that use it, I am blown away that this part of history wasn’t in the school text books. The culture we all live in and the history we all share is made up of such details!

Who is my favorite person from Deaf History? I don’t even feel worthy to answer! Each one you highlight in your brief Deaf History review has their own incredible story of courage or cruelty!

And finally, I believe that there are more “Heather Whitestones” out there! Incredible people from our deaf communities that will continue to set the pace for the rest of us – in pushing beyond what others say “can’t work” or “shouldn’t happen”, and challenging our perceptions – for both the Deaf and Hearing alike!

Your site is a rich resource and a beautiful gem to showcase a wonderful language! And thanks for making it accessible and free to anyone willing to expand their minds and their hearts.

Heather Whitestone is my favorite person from deaf history simply because she really did prove, just like Beethoven, that a deaf person can in fact pull things off easily if given a chance.

For instance, according to doctors, I have been hearing impaired since the day I was born. Because of this, my band-director from high school says I am a waste of talent because I can play guitar, trumpet, and sing, but yet I am currently going to college for a degree in drafting.

But it still falls with the fact that regardless of your gender or race, as long as you believe in what you do on a regular basis, hearing impaired to completely deaf in both ears or not, you can and will be successful in life and I can promise you that.

I may not have the best life style but I get around. Heather Whitestone may have started in poverty before she had a chance to become Miss America but she still did it, right?

Another example is Beethoven. He couldn’t hear at all yet he wrote many of the Symphonies that we know today in the musical world.

The person I find most interesting in ASL history is Heather Whitestone. Women in general are so often put down because of looks, body figures, and other nonsense. It’s even worse for deaf women. Not only do they already have all the regular weight from society on their shoulders, but hearing people often assume that deaf people can not do the same things as them because they are deaf. For instance, I have a friend who is hard of hearing, and he wanted to go to the music store with his friend. He told his friend and his friend laughed. He asked what was so funny. His friend told him that deaf people don’t go to the music store. It is so difficult for deaf people to be understood. That’s what I absolutely love about Heather Whitestone. She defied all odds and stereotypes of the deaf culture in general and ran as Miss America. The even better part is she won! I may be hearing, but I will not conform to hearing culture and put down the deaf.