Juliette Gordon Low was a deaf woman who was best known for being the founder of the Girl Scouts organization.

Juliette Gordon Low, a Hero to All People 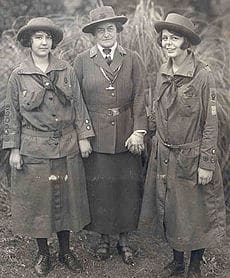 Perhaps no greater tribute can be said than she is not remembered as a “deaf person who” but rather as an outgoing and exciting example of what all people should strive for and that is to be a person of conviction. Ms. Low is known as the founder of the Girl Scout movement that lives on even today. Upon learning all that she endured through her life, it is all the more amazing that she was remembered at all.

Born in 1860 Ms. Low had humble beginnings including being a captive of native Americans for many years and being shipped around the country to different relatives and schools during her early life. She lost a great deal of hearing in one ear after an infection was treated with silver nitrate at the age of 25. A year later she would lose hearing completely in the other ear due to an infection from getting a grain of rice thrown at a wedding lodged in her ear. Her life continued on a downward spiral with a childless marriage and resulting divorce. Through it all she kept up her spirits and engaged people throughout America and England.

She would go on to become an artist and activist for several different causes. It was during a meeting with Lord Baden Powell, the founder of the Boy Scouts in England that Ms. Low became enamored working with children to help them become leaders. Her first efforts were successful in England so she returned home to America and with her sister began the “Girl Guides” which a year later would be renamed the Girl Scouts. It is a testament to her will and great resolve that she did not let her deafness define her, rather she took it in stride as part of her life and went on to make history.

Juliette Low is a personal hero of mine, so it disappoints me to see such mistakes about her life when it is so easy to find the correct information.

Juliette Low was never held captive by Native Americans, her great grandmother was.

Her divorce was not a result of not having children, but because her husband cheated on her.

It wasn’t her sister she founded girl scouts with, but a distant cousin.

She probably didn’t feel bad about being “sent away” to different schools and relatives. It was common practice at the time and resulted in her being a very well educated woman, which helped her in her life’s work.

Not having children was probably something she was very grateful for later, as it made it possible to leave her husband (the divorce wasn’t yet final when he died though) and gave her the freedom she needed to do what she did.

She lived several years with breast cancer, which she later died of, but kept it quiet and continued to devote her time and energy to the Girl Scouts. Juliette Low was an amazing person… and deserves to have her biography relayed correctly.

Irish’s facts are correct. Irish, thank you for adding these corrections.

It was Juliette Gordon Low’s great grandmother Eleanor (Lytle) Kinzie who was captured and adopted by Seneca Indians as a child, eventually returned to her family, and later became the wife of the original pioneer to establish the now-city of Chicago. Juliette Gordon suffered a great deal more from her illnesses that led to her hearing losss, than is commonly known. Her health was sometimes frail, her family at times feared for her life, and she spent much time (fruitlessly) seeking out cures or relief.

As a plucky spirit she adapted and used her deafness to meet her need to remain socially active and eventually, to build her organization of volunteers.

Among the wealthy English aristocrat set of her early marriage, she became the life of the many dinner parties she arranged or attended (her main role as the wife of William Low, a wealthy irresponsible scoundrel who she loved but who betrayed her in the worst. most public, and humiliating fashion. Despite Wille (or maybe because of how loyally and nobly she dealt with his gambling and adultery) she built a wide circle of friends and admirers. Shed became an inveterate story teller, since she oculd not listen to the stories of others.

Later to recruit volunteers for GS, she would simply assign a friend to lead a troop of girls or acomplish another task- then ignore them if they tried to decline by using her deafness as an excuse not to hear.

Ms. Low was born into a family of privilege. She was never kidnapped by native Americans. She was sent to the best boarding schools and had an early childhood of priveledge, art, music, education and travel.

She had hearing impairment. The rice was lodged into the same ear that was treated with silver nitrate. She eventually lost most of the hearing in the other ear. Medical science at the time believed it was due to that ear having to overcompensate for the loss in the other ear.

Please do your research and view more reputable sources before making conclusions about Ms. Low.

Amazing, I have been a Girl Scout for more than 30 years; I received the highest award, The Gold Award. Having done I that I have with the Girl Scouts, I never knew she was Deaf. I have always considered her and amazing woman, and now even more so.

Too many to choose just one…

There are so many deaf, hard of hearing as well as hearing people that have made such great contributions to the deaf community and how they are interacted with and perceived by the world. Choosing just one favorite is very difficult. There are many ways of looking at the evolution of ASL and what it means to those that use it.

Learning of Laura Bridgman and that Helen Keller was not the first deaf mute to receive schooling was very inspiring, after all the difficulty that both of them went through in their lives, to see the result as a true test of how dedicated they were and how the struggles inspired so many others.

I was surprised to see Juliet Gordon Low on the list. I have been a Girl Scout for many years as a girl and now as a leader. I was not aware that she was even hard of hearing or deaf in any way. The inspiration that I have found in her leadership and learning ideals for young girls has just been increased after learning the difficulties she had in her own youth.
I greatly admire Abbe de L’Epee and Dr. Thomas Hopkins Gallaudet for bringing a more universally used and understood sign language to France and America. By creating a standard form of signing like ASL, it allows more people deaf, hard of hearing, and even the hearing to be understood. I really like that these languages have been compiled of signs that had been developed at home by those people that needed it and used it on a daily basis.
Another is Laurent Clerc, he has been such a large influence on the way sign language has been taught. Clerc was the co-founder, with Gallaudet, of the first Deaf school in America that opened April 15, 1817. The American School for the Deaf is still open and is listed as the oldest existing school for the deaf in North America.

While I admire so many of these deaf and hard of hearing people on the list, it is too difficult to choose only one that would be my favorite. The information I have learned through out this lesson and reading these articles has inspired me in more than one way. The limited access I have to deaf people did not prepare me for the struggles of their culture and history. Learning ASL has taught me more than just the language, I am looking forward more of these lessons as well as learning more of the culture.