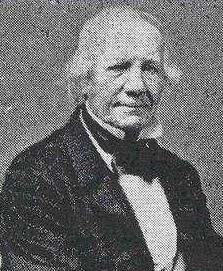 Laurent Clerc played a significant part in the history of American Sign Language and was the first deaf teacher of the deaf in America. He was also among the first of these educators in the world and has been known as “The Apostle of the Deaf in America” and “The Father of the Deaf.”

Not only was Laurent Clerc co-founder of the first school for the deaf in America, but he was the first great supporter of sign language over oral instruction in America, an advocate for the rights of deaf people, and he inspired the spread of deaf education across the U.S.

The Apostle of the Deaf in America

Laurent Clerc is one of the most famous people in Deaf history. He is known for helping start the first permanent school for the Deaf in the United States, called the American School for the Deaf. He is one of my favorite people from deaf history because he devoted much of his time to improve the lives of deaf people in America.

Louis Laurent Marie Clerc was born in France on December 26, 1785. When he was one year old, he fell out of his highchair and into the fireplace. It is believed by most that this incident was the cause of his deafness. When Clerc was twelve, he started attending the School for the Deaf in Paris. He had received no formal education prior to this. He did very well in most of his studies. Once, an assistant teacher grew frustrated with Clerc’s difficulty to pronounce some syllables and hit him under the chin. He bit down hard on his tongue, reenforcing in his mind that sign language was the best way to teach deaf students. In 1806, Clerc was hired as a teacher at the School for the Deaf in Paris.

Clerc was in England to give a lecture when he met Thomas Hopkins Gallaudet. Gallaudet was invited by his new friend to attend classes at the school where Clerc taught, and he readily agreed. Gallaudet soon asked Clerc to go to America with him and establish a school for the deaf. On June 18, 1816, they left France to travel to America. Although they successfully arrived in America, they could not start the school just yet. They spent time traveling to different cities, spreading the word and gaining support. On April 15, 1817, Clerc and Gallaudet started their school in rooms that were rented. They had only seven students at first. The school was called the Connecticut Asylum at Hartford for the Instruction of Deaf and Dumb Persons. Today it is called the American School for the Deaf. In 1819, Clerc married one of the former pupils of his school named Eliza Crocker Boardman. Together they had six children. Clerc only returned to France three times since moving to the US. He dedicated much of his life to provide better education to deaf people. Laurent Clerc died at home on July 18, 1869, at the age of eighty-three.

My favourite person in Deaf history is Laurent Clerc because he was Deaf and he taught Thomas Gallaudet FSL. I think it is very cool of him to be willing to teach a hearing person sign language, and to accompany him to another country to start a school for the Deaf. I think that was very brave of Clerc to leave his home country and culture and embark on this journey to an unknown country and culture with a person he hadn’t known for very long.

I wonder sometimes why they didn’t name the university after Clerc since he was Deaf.

I also think it is neat how Clerc stayed in America after founding what became known as the American School for the Deaf, with Gallaudet. He stayed and taught at this school instead of returning to teach in France as he was doing before Gallaudet came to France. I find this very interesting. Clerc sounds like he was an adventurous person who didn’t mind taking risks for a worthy endeavor.

I admire Laurent Clerc for his adventuresome spirit and his benevolence toward Gallaudet. I also admire his other-centeredness, and willingness to give back to the Deaf community. Even long after his death his memory and legacy lives on in the Deaf community.

My favorite person in deaf history is Laurent Clerc. He was not given an education for the first eleven or twelve years of his life. He stayed at home taking care of the animals, while others his age were going to school getting an education.

Many people thought that deaf people could not gain an education, whether because it was too much work to teach them or for other reasons, not many hearing people put in much effort or help.

Once finally put in a school at the age of twelve, Clerc was clearly a bright child. He went on to learn many things including sign language that he, in fact, taught to Gallaudet, who, in turn, tutored him in the English language.

After meeting Gallaudet, he was offered a teaching position in Russia. He turned the offer down due to financial reasons. Gallaudet and Clerc began their journey together, they traveled to America, and Clerc met Alice Cogswell, who was the inspiration, and beginning of Gallaudet’s amazing life of education and dedication.

Together Clerc and Gallaudet were a great team; they went on to raise $12,000 after demonstrating their teaching methods, and giving speeches to show their, much more effective, way of teaching with signing rather than the oral method.

He had a huge impact on many lives. Deaf and hearing, learned through his example, he is certainly not a forgotten man.

It is difficult to select just one person from such a long list of noted personalities who have played various roles in the history of the deaf culture in the U. S. and around the world. What criteria does one use in selecting from Bridgman the Gallaudets, Bell, Stokoe, then Keller, Hoy, Matlin, Jordan, and so many others?

The task is eased somewhat for me when I consider a mighty oak. The highest branch on the tree would never be there were it not for the strong roots firmly planted in rich soil.

Using that as my guide, I must stray from the mandate of the question, and mention not just one individual, but several whose combined efforts formed the strong roots of deaf culture development.

There is Abbe Charles l’Epee, the “Father of the Deaf,” who established the first deaf school in Europe in 1771, and 21 schools for the deaf in total. There is Laurent Clerc, who met Thomas Hopkins Gallaudet in Europe and returned with him to the U. S. and helped start the first school for the deaf in the U. S. Most of the twenty-two other schools for the deaf in the U. S. at that time were founded by Clerc’s students. Thomas Hopkins Gallaudet went to France and met Abbe Sicard, who wrote a dictionary of signs. Upon returning to the U. S. Gallaudet helped establish the American School for the Deaf in 1817. His son, Edward Gallaudet, followed in his footsteps and was Superintendent of the Columbia Institution for the Deaf in Washington, D. C., the forerunner of the Gallaudet University of today.

These mentioned here, and countless others throughout the history of the deaf culture, are mighty roots indeed, and a proud heritage of the Deaf.