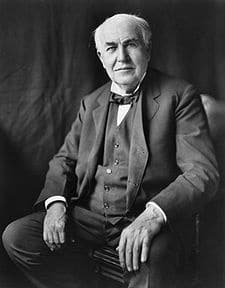 Another famous deaf person is Thomas Alva Edison who was born on February 11, 1847. He was an American scientist, inventor, and businessman.

However, many people don’t know that Edison had a hearing loss since childhood and reportedly lost more of his hearing and became technically deaf in his early teens.

Thomas Edison had a laboratory in West Orange where he had a team of workers that helped him create inventions for profit on a regular basis.

In the 1860s, Edison became a telegraph operator. Some of Edison’s earliest inventions were related to electrical telegraphy. One of these inventions was a stock ticker. Edison applied for his first patent on October 28, 1868 for an electric vote recorder.

The tin foil phonograph was Edison’s first great invention. When Edison was working to improve a telegraph transmitter, he noticed that when played at a high speed, the machine’s tape gave off a noise that resembled spoken words. He then wondered if he could record a telephone message.

Edison experimented with the diaphragm of a telephone receiver by attaching a needle to it. He figured that the needle could prick paper tape to record a message. These experiments led Edison to try using a stylus on a tinfoil cylinder. To his great surprise, this played back a short message he recorded which was “Mary had a little lamb.” This was the first machine that could record and reproduce sound.

Thomas Edison is world renowned and held a world record for 1,093 patents. He is also credited with inventing electricity, the light bulb, and Edison Motion Pictures.

by Anonymous: Edison didn’t quite invent electricity, but he did did a lot more with it than just about anyone else before him. That aside, his hearing loss makes his ability to run a workshop of that magnitude even more impressive, and it also explains a particular trend of some of his experiments and inventions!

Thomas Edison was born on  February 11th of 1847 in Ohio. His father was named Samuel Edison and his mother was named Nancy Edison. His family eventually moved to Michigan because of the work that it offered Samuel Edison. Thomas Edison only attended 2 months of school because he was hard of hearing and had trouble understanding the teacher. Filled with curiosity Thomas Edison began to self-teach himself and began to tinker at a very young age. Then when he was 16 he began to learn how to use a telegraph. His frustrating experience with a telegraph machine gave him a desire to build a more effective way of communication.

Thomas Edison became an inventor after quitting his job as a telegrapher. After trial and error, he finally invented the machine that would give him the representation and the money needed to become a full time inventor. The universal stock printer in 1871. All though not as grand of an invention as the ones he makes in the future he sold it to Western Union for $40,000. His next big invention came in 1877 when he made the Phonograph. The phonograph was basically a way to record sound. Then in 1880, Thomas Edison made an invention that would forever give him a name in history the Light Bulb. The idea of a light bulb had been around for some time and there were already numerous designs for light bulb’s though none of these were effective and safe to use yet. That all changed when Thomas Edison bought the rights to an already made light bulb patent from 2 scientist names Mathew Evans and Henry Woodward. After tinkering for a little bit Thomas Edison finally found a way to make an effective and safe light bulb. Instead of using gas, Edison used electricity. But in order for the electricity not to overheat, Edison made a current that sends electricity into the light bulb where light is released then it would exit the bulb safely. With this invention, Thomas Edison was able to provide a safe light source.

Aside from his inventions, Thomas Edison had a family.  He first married Mary Stilwell in 1871. They had 3 kids: Marin, Thomas, and William. But after a 13 year marriage, Mary died at 29  in 1884 because of a brain tumor. But two years later Thomas remarried Mina Miller in 1886. Together they had three kids: Madeleine, Charles, and Theodore. This gave Edison a total of six kids, two daughters ( Marin and Madeleine) and four sons ( Thomas, William, Charles, and Theodore). After a nice 45 year marriage with Mina, Thomas Edison died in1931. Even though Thomas Edison’s son William Edison carries on his dad’s legacy as an inventor.