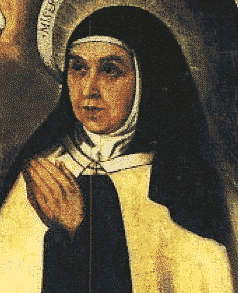 Teresa de Cartagena was a nun in 15th Century Spain. She is remarkable for being Spain’s first feminist writer as well as for being deaf and writing positively about it.

Teresa went deaf in her late twenties/early thirties. She was devastated by this, thinking that God was punishing her despite her devotion to Him. However, eventually she came to the conclusion that He had deafened her to teach her virtue and to ultimately bring her closer to Him. She wrote about this in a book called Grove of the Infirm.

Many men did not believe that a woman could have written so eloquently and expressed such revolutionary ideas. They believed it was plagiarized. So Teresa wrote a second book, called Wonder at the Works of God, defending the first one, and this one took a much more feminist stance. She argued that it was no less natural for women to write than men, and that in questioning that, they questioned the authority of God. She was the first person in Medieval Spain to say that men and women were equal in the eyes of God.

Teresa de Cartagena was a very important figure for Medieval Europe. Her ideas about gender, God, and disability were completely revolutionary at the time.